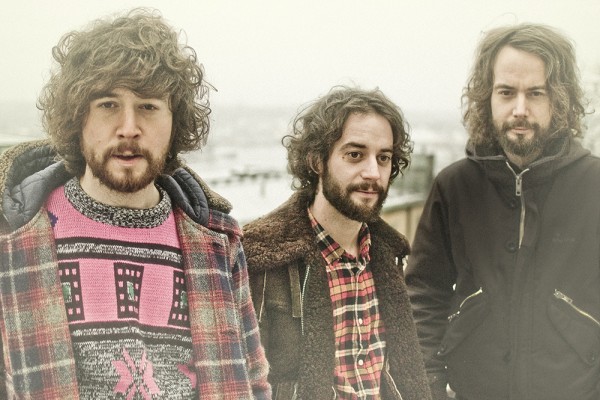 ”False Alarm of Spring”, the debut album of Swedish brother trio Stalon, is now available on CD for the first time. The seven-song release draws upon the modern soundscapes of their homeland combined with the melodics of vintage straight-ahead-pop. Or as they put it themselves: ”It reflects the pop section of our record collections”.

– Anything with a good melody grabs our attention, so that’s basically what we’ve tried to do. A melodic pop album, they say.

A Swedish version of ”False Alarm of Spring” was released earlier this year while the English equivalent remained in the vaults. Until now.

– We’re thrilled that ThisTime Records is making a hard copy available. They have an impressive track record of releasing music by artists that we enjoy, so we feel honoured to be in such good company.

Hailing from Lapland in the north of Sweden, the three Jonsson brothers spent their early years ice fishing, riding snowmobiles and practising their instruments. Their mother and father, the latter being a high school music teacher, were very supportive of their passion.

– We’re actually six brothers and everyone plays an instrument. It was like the Osmonds growing up, but without all the cameras.

Life was easy, the melodies were sweet. But one by one they left their native soil and in the spring of 2011 Kristoffer, Philip and Viktor were all residing in Stockholm, a long way from the lakes and low mountain lands of their boyhood. It didn’t take them long to form a band. They called it Stalon.

Despite having a brand new album out, Stalon finds no reason to rest on laurels.  They are currently playing gigs and spending time in the studio working on the follow-up album to ”False Alarm of Spring”, slated for release in 2016.

Got any questions? Send a note to info(a)stalon.se, but make sure to change the fake (a) to a real @. Press photos are available on the ”Press” page. Please give credit to the photographer, whose name is included in the file name.